June 20, 2013 – Wilmington Mayor Billy Saffo hands Stephen King a key to the city during the Under The Dome Red Carpet Premiere

The red carpet came alive last night as about 90 % of the cast came out and celebrated with the locals at the Under The Dome Red Carpet Premiere.  We have tons of video footage and photos.  As soon as I can put it all together I will be releasing it piece by piece starting today.  A HUGE thank you to C-G Productions (CG’s Website,   Twitter and Facebook) and David Pasqua for shooting the event!  They were amazing!  Check out all the photos from the event:

Our handsome Mayor Billy Saffo greeted the crowd and read the proclamation, honored Stephen King with a key to the city, then  declared June 24th Dome Day!  The Under the Dome folks are filming at Waterford in Leland, then move to stage for the rest of the night. 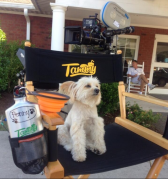 Today is the last day on Tammy 😦  I will miss that cast big time!  But I have a feeling Miss Penny (Susan Sarandon’s angel) will miss Wilmington even more.  For their last hoorah, they will be on Blue Clay Road (between N. Kerr & N. College Rd.) and also 2610 N. 23rd Street.  Melissa McCarthy, Susan Sarandon and the gang will be on set.  And finally, Mullet Alert: Eastbound and Down will be shooting on 21st and Chestnut today.