Holy Hounddog, it’s Friday!  Can I get a woop woop!?  Let’s start off with our Wilmywood shot Sleepy Hollow.  They are hot today on TV.  First Orlando Jones kicks off the morning on Rachel Ray this morning at 9am on CBS-10 WILM!  He’ll be taking us behind the scenes of  Sleepy Hollow with a set tour just in time for the big finale! 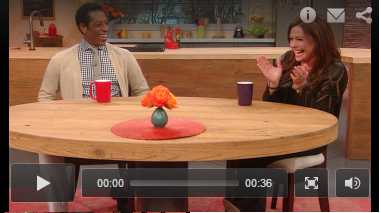 Then tonight get ready for Nicole Beharie on Arsenio Hall tonight!!  Thanks to @Donnarie2 for the scoop!

Yesterday, we watched the Oscar Nominees roll in and two North Carolina got recognized. We expected Iron Man 3 to get a nom, and it did for Visual Effects. But our jaws dropped when we saw the next one. After all, when do you ever see a comedy EVER get a nomination at the Oscars? It’s a rare occurrence. But hey, we’ll take it! So HUGE congratulations to Jackass Presents: Bad Grandpa! The Hair and Makeup department got the nomination! Very well deserved! Johnny Knoxville looked amazing! Makeup artist Steve Prouty said in a statement:

“I’m very proud of having been a part of this film,” Prouty said. “We worked very hard each day to help bring Irving Zisman to life and are eternally grateful to have worked with someone like Johnny Knoxville. He is a true talent.”

Now let’s head to Charlotte, NC for a spell.  Actress Angie Harmon ( Law & Order, Rizzoli & Isles)  was appointed to the Studio Charlotte board. She gave her plea to Charlotte City Council members yesterday to approve Studio Charlotte. The developer has until the spring to convince city leaders to OK the plan to remake the Eastland Mall site.   READ STORY NOW

Also on the Charlotte front, in the latest issue of Production Weekly, they report Charlotte will get the feature film, The Sharp Files later this year.  This suspenseful flick is about a professional psychiatrist, Laura Sharp, who struggles with her own mental state after the death of her husband and two children. She must work to find out what is real as she deals with four mysterious and dangerous patients.  M.J. Alhabeeb Jr. will direct.

If you didn’t see it yesterday, WWAY’s Daniel Seamans did a cute little blurb about a man we all know and love in the film industry – Chunky!  Check it out now: Extraordinary People: The grip who was sponsored by the Terminator

Come out to Jake’s Memory Lane Comics TOMORROW and meet Superstar Comic Artist Phil Jimenez (Infinite Crisis, Wonder Woman, New X-Men) and new comic writer/ animal advocate Scott Lope.
MLC is teaming up with Jimenez, Lope and, of course, the Savage Wolverine to fight Rhino poaching. 100 percent of the proceeds of Savage Wolverine 12 and 13 from our store will be donated to Animal Warriors to help take the fight to the poachers. This is a great family friendly event. We have plenty of copies to get signed by the Marvel Comics creators. The signing starts at 1pm.  In addition to the signing, they’ll have some crazy good specials, including a fifty cent comic sale!

Finally, I hope you join me tonight as my birthday week comes to an end with a bash at Ziggy’s by the Sea downtown Wilmington with one of the most incredible bands, Cowboy Mouth.  So please come and join in on the celebration Wilmywood!

I will have The Wilmywood Week in Review for you tomorrow, so check the blog sometime this weekend.  It’s a video wrap up of a week of Wilmywood Film News.  HERE’S LAST WEEK’S “WEEK IN REVIEW”

That just about does it for me; I will have more Wilmywood updates for you Monday morning (unless something breaks) and every weekday morning we do “What’s Up in Wilmywood” at 7:30am & 8:30am LIVE on Sunny 104.5.  Got Scoop?  Email me: sheila_brothers@yahoo.com.  Or message me on Wilmywood’s FB .  You can also just post your comments below!  Until then, that’s a wrap!!