It was a great first day Under the Dome.  The set in Burgaw was filled with CBS peeps and of course, as expected, they had a visit from Neal Baer and Stephen King himself. King, of course, was his typical humorous self yesterday.  If you haven’t seen this yet, it’s short, sweet and hilarious!

But perhaps the most noted part of the day was how they kicked off their first morning of season two.  It was with a moment of silence for Sarah Elizabeth Jones. 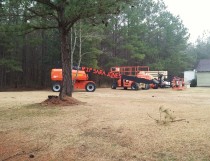 Their slates still branded with her name as well as a crane in large red taped letters.  They made sure crew members took on the responsibility of looking out for each other as well as themselves.  The rain finally had its way in the early afternoon, so they made a company move to the stage, at beautiful Screen Gems Studios, where they will be this morning.

Day two resumed for ABC’s Secret & Lies, but the rain didn’t stop them from filming Ryan Phillippe in what will be Ben’s  morning jog that changed his life forever.  The very social producer Aaron Kaplan tweeted:

.@RyanPhillippe running in the rain while shooting 'Secrets & Lies' in Wilmington, NC. Catch it only on @ABCNetwork. pic.twitter.com/3FRj1eeTXC

Yesterday, we finally got a casting announcement.  Congrats to our latest stars. Shanley Caswell and Aimee Garcia will join the cast of what was once called the Red Zone is now back to its original vague title, The Untitled Nikki Tuscano Project.  Shanley Caswell is making her way back to Wilmywood, as she was just recently here for The Conjuring. She will play Holden’s daughter, a “cute but slightly awkward teenager with a lively interest in world affairs.”

Max Steel has officially opened offices here in Wilmington, but it is not at Screen Gems Studios. I’m not sure if they want their office info released yet, so holding off for the moment.  But I can give a nice warm welcome to the office staff!

Thanks to WWAY for shooting me this over yesterday.  It seems as though Secretary of Commerce Sharon Decker wants to ease our minds when it comes to the NC Film Incentives.  She believes the incentives won’t be terminated but cannot assure us if they will remain the same. Well, no one really can.  Only the May vote can tell us that.  And if they keep them but decide to enact any changes, that could lead to a temporary lapse.  So, everything is simply up in the air at the moment.  However, as reassuring as Decker sounds, we need to continue to contact our legislators about keeping the incentives intact, because even a short lapse could be devastating for North Carolina.  I do appreciate her addressing the issue though because it affects 1000s of us here in NC.  READ MORE NOW

THIS MORNING: Scott Davis joins me tomorrow on the Sunny Morning Show to talk about the celebration for Cuz!  8:15am on Sunny 104.5.  You can listen live online.

LOOKING FOR THOSE FILM=JOB STICKERS? Sunrise Broadcasting has a few.  Feel free to stop by and grab you one while they last at 25 N. Kerr Ave. (near the intersection of Market and Kerr across from the new Walgreens). Offices are open from 8:30am-5:30pm M-F.  Please one sticker per person please.  They will run out fast!  Thanks!