Mornin!  Hopefully it will be a bit drier today!  What a downpour yesterday!  Loved Director Stewart Hendler’s Tweet yesterday regarding the matter…he’s so fabulous! 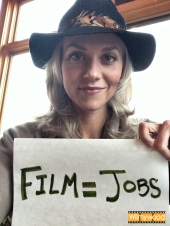 Last night, I posted a letter that One Tree Hill‘s Hilarie Burton shared with me to pass along to you. Although she no longer lives here, North Carolina and the film crew will always be in her heart.

To the North Carolina voters and legislators,
Please forgive me for not being able to attend this weekend’s film rally. I’m already signed up to attend the Olevolos2014 fundraiser for a One Tree Hill castmate – Bryan Greenberg – up in NYC. But I wanted to send along a message of support for the NC Film community as the State’s current incentive is up for discussion.  READ LETTER NOW

Actor/Director Tim Guinee, who we know in Wilmywood from NBC’s Revolution talked with me today. We chatted about FX’s How and Why, his award winning short film One Armed Man & the NC Film Incentives. Great conversation! LISTEN NOW!

NC FILM RALLY: The count is also just 3 days away and WE NEED YOU!  Film Fans, Small Businesses, Vendors, Crew, Background, ALL of you!  This Sunday at 5pm on the Riverwalk Downtown.  Bring your signs, wear your film shirts!  Let’s do this! CLICK TO say you’re going! 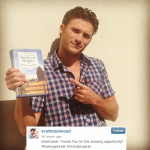 Scott Eastwood (Clint Eastwood’s son) is set to star in our soon to be Wilmywood shot The Longest Ride from Nicholas Spark’s 2013 novel of the same name.  He will play Luke Collins, “whose love affair with college senior Sophia Danko plays out as the youthful half of the romantic saga.” READ MORE NOW

(Totally stole this from their site)The 3rd annual Surfalorus Film Festival is proud to announce its partnership with the Wrightsville Beach Museum and the Wrightsville Beach Longboard Association in founding the Inaugural Wrightsville Beach Waterman Ocean Festival, held May 1-3. Surfers, nature lovers, water weirdos, cinephiles and fans of everything aquatic will enjoy three days of screenings, soirees, and contests exclusively in Wrightsville Beach – bringing people from Southeastern North Carolina together to celebrate low country coastal culture. The Surfalorus you know and love will still feature the hottest new surf films and docs and will include the outdoor Board + Beach Expo a Tidal Creek Co-op.  With 3 nights of free screenings and 4 days of sun soaked action, this year’s festival is sure fire fun. Visit the Surfalorus website for more information.

The 2014 Cape Fear Independent Film Festival will take place in downtown Wilmington on MAY 1st – MAY 4th.  Screenings will be at THE BROWNCOAT THEATRE (111 Grace St.) and THALIAN HALL (310 Chestnut St.)

That just about does it for me; I will have more Wilmywood updates for you tomorrow morning (unless something breaks) and every weekday morning we do “What’s Up in Wilmywood” at 7:30am & 8:30am LIVE on Sunny 104.5.  And on Thursdays during Cape Fear CW‘s Primetime News at 10!  Got Scoop?  Email me:  sheila_brothers@yahoo.com.  Or message me on Wilmywood’s FB  or on Twitter.  You can also just post your comments below!  Until then, that’s a wrap!!