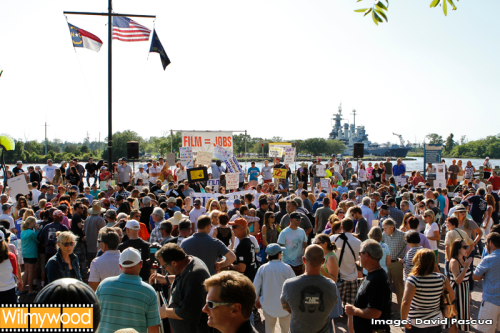 I was totally amazed at the outpouring of community support at the Wilmington Film Rally. I have covered rallies for over 20 years and never seen the togetherness of the film workers and the local government leaders at any event.

As a owner of 3 TV stations WGSR 47.7 WGSR, WMDV 44.1 Martinsville, and WMDV 44.2 Danville I’m limited in what I can do, but I left Sunday’s Rally wanted to do something.  TV and film production is a part of my life, we also own a 5 Plex Cinema in Martinsville.

I’m also blown away with your passion for Wilmington film, most people in your business are thinking about themselves and their next big market move. You LOVE WILMINGTON FILM and it shows.

I want to travel to Raleigh and cover these guys to keep them accountable. You guys are contagious!  Here is a link to the video that we aired.