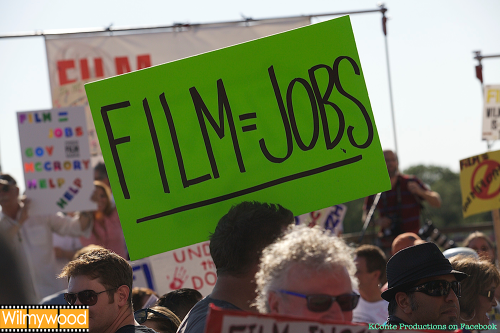 UPDATE: Via NC Film News via NC Film Incentives Put North Carolina To Work: “On WFAE NPR this morning, Pat McCrory again LIED regarding Comedy Central’s lawful utilization of the current film incentive during their time in Charlotte at the Democratic National Convention. Characterizing The Daily Show as having taken advantage of a “loophole”, he overstated that the production was “‘given’ over $400,000.”

Yep!  I just called the radio station and indeed he did spew out false numbers yet again!  No wonder there are legislators and others who don’t support the film incentives.  When our LEADERS flat out lie, and NEVER retract their statement, misinformation is EVERYWHERE! ARGH!

“With all respect to Jon Stewart.”  Nice Pat, real nice.

Would anyone else like to join me by telling Pat McCrory to STOP spewing out false numbers?

Choose Option 3 to speak to a human being, not option 2, which is the opinion line!

So, wanna see who got what regarding the NC film incentives?  Click away!  (Remember the “total spending” means total spent in NC. Some things qualify, some don’t).