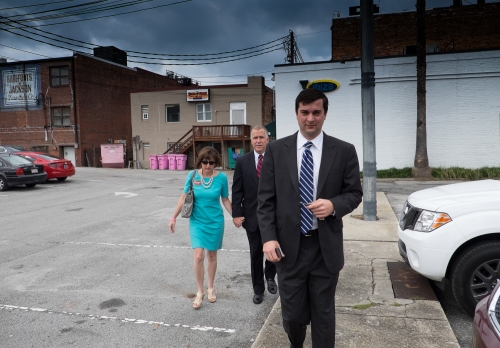 This morning on Market St between Front and 2nd, a total of 63 film supporters came out for a last minute mini-rally.  Not a bad turn out considering the rest of the folks are working. And what better place to hold one when the NJ Governor Chris Christie came into town to support the Koch Brothers’  funded Thom Tillis Campaign for US Senate.  We gathered and shared voting information, discussed which NCGA members are for and against our NC Film Incentives  (See Filmmakers voting guide – NCGA_FilmmakersVotingGuide_2014) and also to express our feelings about Thom Tillis showing up in Southeastern North Carolina to do some fundraising. As you know his campaign will fail without SENC on his side, and we will do everything we can to stop him.

When the cars came around in front of the Dixie Grill, Gov. Christie looked a little surprised at the crowd before him. Thom, not so much.  He’s got a good poker face. We gave them their respected breathing room and stood on the median 20 feet away. As media from Charlotte, Raleigh and, of course, Wilmington rolled their cameras and audio devices, the film supporters chanted, “Film =Jobs” until their vocal chords needed a rest.  As Tillis and Christie sashayed through the restaurant doors, a film truck rolled by with joyous honks to support those holding signs.

Meanwhile, Thom Goolsby snuck through the back door to get into the event.

While indoors they smiled and shook hands with their supporters, but the crowd moved on either side of the doorway, lining the curb and still chanting every few minutes.  As expected, Tillis said what we predicted he would say the minute he did his thing in the short session. “Well, I voted for film.”  When one knows the Senate won’t take it up, one can say anything he or she likes to look good.  Perhaps he shouldn’t have had his people whipping up votes against film the first time around!  I am not sure if he thinks we would not remember, or we are just plain dumb, but whatever the case, it was a nice effort on his part.  Bless his heart.

Knowing that we would not leave, it appeared that he chose to exit through the back door in order to avoid us like the plague as did Gov. Christie and Thom Goolsby. Is there any other explanation? Can’t think of any, either. We left the walkway clear for them to exit. I consider that quite a cowardice move, don’t you?

If you were unsure of what they really think about film in this state, you know now.  We have got to let them know just because you have billionaires in your back pocket, and “celebrity” politicians supporting you, doesn’t mean you will get elected. 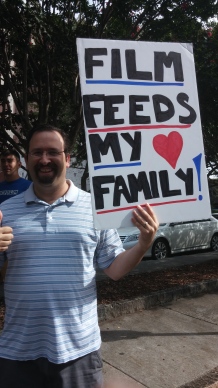 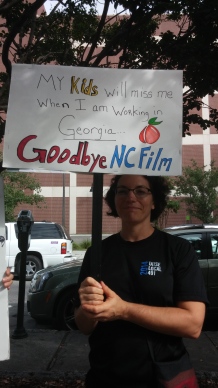 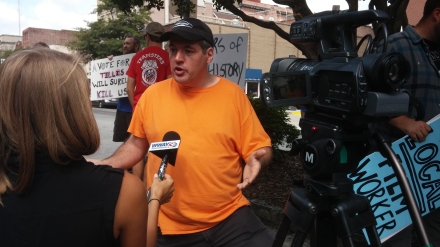