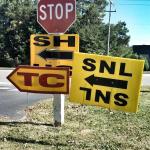 Secrets & Lies is back in Porter’s Neck. They only have a few more weeks until they wrap!

It’s lucky day 13 for The Choice and the folks are back on private property today.  At Travis’ house to be exact.  I can tell you the fun will kick off tomorrow as they head to the fair! At the fair, all your friends are there!  Doh!  That song will never get out of my head now!  Anyway, it should be a great carnival time for a couple of days. Oh, and by the way the rumors were true, Nicholas Sparks was indeed on set yesterday!  Yay! Welcome back to Wilmywood Mr. Sparks!

Sleepy Hollow will be at the Cape Fear Club on Chestnut St. Lots of cast members in this scene today!

Sleepy Hollow’s Ichabod Crane aka Tom Mison was on Letterman last night.  Check him out on the Today show this morning! WATCH TOM ON LETTERMAN

Lot’s of great news came out yesterday, so let’s recap!

ICYMI: Thanks to our Fox show, Wilmywood is getting more recognition.  Last week, we found out that Wilmington was deemed Best American Riverfront thanks to your vote in USA Today.  Now Fox News has put out the top 10 list of Spookiest Cemeteries in the US. READ MORE NOW

ICYMI: EUE/ Screen Gems is getting a little mini-facelift this weekend, some new paint and a new sign, so there will be NO tours this weekend while they complete all their work.  Look forward to the little makeover to be completed by Monday morning!

ICYMI:  CREW CALL – The biggest news to come out yesterday was that Wilmywood gets one more feature film before the film incentives expire at the end of the year.  I know that will be a big relief to a lot of crew members and background extras getting a paycheck during the holidays!  Blue Mountain State: The Movie will be opening up offices this week in Wilmington, NC.  The comedy starring Alan Ritchson (Hunger Games) and Denise Richards (Wild Things) is now accepting crew resumes. Shooting will take place in the Wilmington area. Production should run about 4 weeks. Production begins November 18th. GET MORE DETAILS NOW 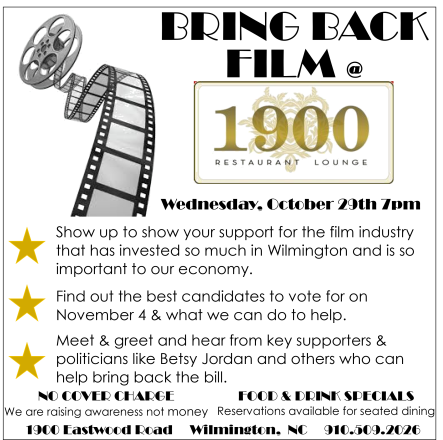 The Bring Back Film party is tonight at 1900, a film friendly and favorite restaurant and lounge in Lumina Station!  Please come out tonight!  The event kicks off at 7pm.  GO HERE: FACEBOOK INVITE

Now, where are our “Thank You” billboards from the local film crew to the community?  Local crew member Chris Courter has the update!

Money is still coming in for our billboard campaign! We have just been able to add a 3rd location!!! Now, for every $35 (special daily rate we just secured) we receive, the third billboard will be up and running for another day! Help keep the message going!!! This is on going, so please feel free to donate at any time! DONATE NOW!

REMEMBER TO VOTE!  You only have between today and Saturday to get your early vote in! If you wait until election day, Tuesday, November 4th you MUST vote at your precise precinct or your vote will not count!  Early voting gives you a variety of places to vote in your county! GO TO LIST OF POLLING LOCATIONS NOW