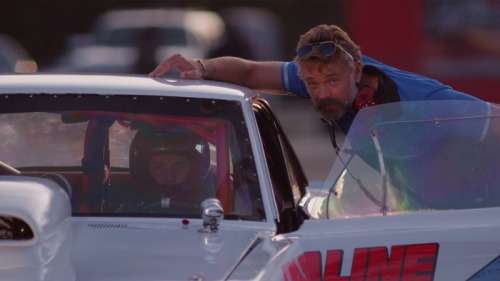 Many of you saw this flick last month as they SOLD OUT two showings here in Wilmywood.  And if you were one of the lucky ones to get  yourself a ticket, you already know this tidbit.  Regardless, you should be VERY proud of our Wilmington, NC filmmakers. Our local boys and one “good old boy,” John Schneider, got themselves a distribution deal with Word Films for the NC-shot, family feature,  Adrenaline.  It stars John Schneider along with local actors Michael Rosander, Myke Homes, and Anthony Reynolds to name a few.  Oh and let’s not forget the fabulous Gregory Alan Williams. It was written, produced and directed by Joseph Quinn Simpkins. Additional writers include Alex Chatfield and Michael Rosander. The film was produced by Del Baron among others.  It was truly a very collaborative effort.  SEE FULL CAST AND CREW CREDITS

After straightening the curves all these years, it was a pleasure to finally race in a straight line,” said Schneider, the beloved Dukes of Hazard star. “I am very excited about this film.

Adrenaline is the story of a drag racer whose life is changed forever by a near-fatal car crash that leaves him partially paralyzed, forcing him to face new circumstances as he ultimately learns to race again.