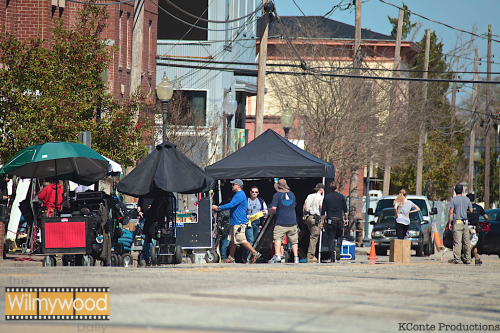 The first week of production for Words on Bathroom Walls was this week. Here’s a few articles from the local media to view:

WWAY – Wilmywood is back in Action as Filming Kicks Off

What’s Next for film?

With nothing on the official books, what’s going to happen when Words on Bathroom Walls heads to post-production? The handful of crew members who actually got a film job here are filled with dread praying this won’t be their last gig in the Port City or the last job in film period.  Hopefully our legislators understand by now that the stench HB2 spewed is still stronger than a hog farm. Combine that with the lack of consistency, the mixed messages that have been given and you have the end result. No work.

Hollywood does know however just how great Wilmington is as a location, How use friendly and affordable EUE/Screen Gems Studios are,  and how strong and talented our crew members are. So, what can we do?  The question that comes around year after year is brewing again. Can Wilmington offer their own film incentives? We’ve done it before, why not do it again…

The Star News asked that very question. Read about it now: Could Wilmington, New Hanover offer their own film incentives?

What’s next for Wilmington on the small screen?

The next Wilmington restaurant to be featured on “Diners, Drive-ins, and Dives” is the Cast Iron Kitchen. The segment will air on the Food Network show on May 25th at 9 p.m.

Then the final Wilmington restaurant will be Sweet n Savory Cafe.  Episode 12 titled ‘East Coast, West Coast’ will air at 9 p.m. on June 8th. They describe it as “a bakery-restaurant making major meatloaf and frying up French toast with a fantastic twist.”

Check out the TV Schedule now.