Good morning Wilmywood!  I am so pleased to tell you that later today, I have an interview with the fabulous Amandla Stenberg.  At the moment she is working on Sleepy Hollow, playing Macey, Captain Irving’s daughter.  Her debut episode will be November 25th.  This 15 year old is beautiful inside and out.  Not only is she a gifted actress but she believes in giving back.  She will talk to us about her being a youth advocate for the No Kid Hungry Campaign.

Sleepy Hollow’s final numbers came in and The Midnight Ride adjusted up a tenth – 2.6 rating, 7 share, with a little over 7 million viewers.   And speaking of fabulous shows with fabulous writers and producers, Roberto Orci and Alex Kurtzman are teaming with author Joe Hill to “resurrect” one of my favorite shows from the 1980s – Tales from the Darkside!  How EXCITED are you! According to Vulture.com:

“The CW has been looking to develop a new take on the syndicated series for a while now, and with Hill, Kurtzman and Orci on board, the network has ordered a script for the project. The CW is also poised to move quickly on the project: If it likes the script, the network could air the reboot as soon as this summer. Like the original George A. Romero-created series, the new Tales episodes will be 30 minutes long, episodes will be self-contained and every minute will be designed to scare the hell out of viewers. Mitch Galin, Heather Kadin and Jerry Golod will also serve as exec producers on the project, with Hill writing the script.”  READ COMPLETE ARTICLE NOW!

Oh and by the way, Joe Hill just happens to be the son of Stephen King. See the connection there?  The man who links our 2 hit shows together.  Now if they would shoot this in Wilmywood…

It’s here!  Day 1 of the 19th Cucalorus Film Festival, and as tradition goes it all kicks off with a dance/film samba, rhombus, cha-cha-cha! Filmmakers and choreographers unite to bring you Dance-A-Lorus, a one-of-a-kind event. Tonight, 7:00 PM at Thalian Hall’s Main Stage.  Then at 8pm, the Bellamy Mansion holds the opening night kickoff party. 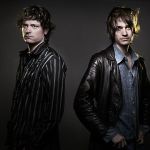 Our local boys, The Brothers Olson (Obin and Amariah) are returning to Wilmywood after a fun-fiilled week at AFM (American Film Market).  We know that their action/thriller Unknown Caller was well received and the details of the deal will be coming out shortly in either The Hollywood Reporter or IndieWire. I’ll keep you posted.  Make sure to stop by their facebook page and give them some major kudos!

ATTENTION NC FILM LOVERS: Don’t miss this presentation about the future of film and the incentive at Cucalorus Film Festival this Thursday, Nov. 14 at Thalian Hall at 4pm.  State of the Slate: The Future of Film in North Carolina.  This special panel presented by Entertainment Partners at the 19th Annual Cucalorus Film Festival will highlight the Film and Television production incentives tax structure and production resources that have made North Carolina an evolving filmmakers destination.  GET ALL THE DETAILS NOW!

Also during Cucalorus, Post 1200 invites you to stop by their open house Thursday-Sunday.  And since our casting lady Vanessa Neimeyer just moved into her swanky office there, she is sharing in the celebration!  Her fun open house party will be this Friday from 10am-3:30pm.  So many stars have passed through Post 1200  for some post work and it was also the production office for Hallmark’s Christmas in Conway.  They will be doing some screenings and giving a tour of the facility along with some coffee and munchies! 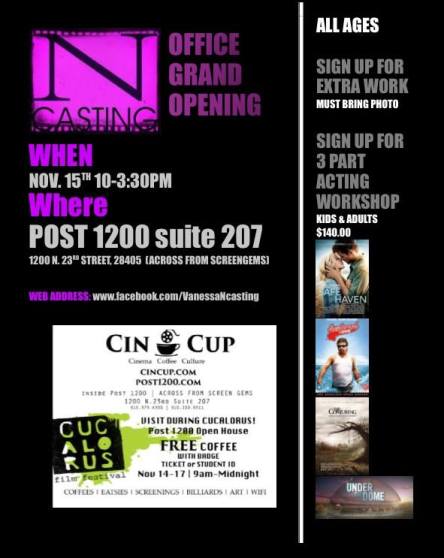