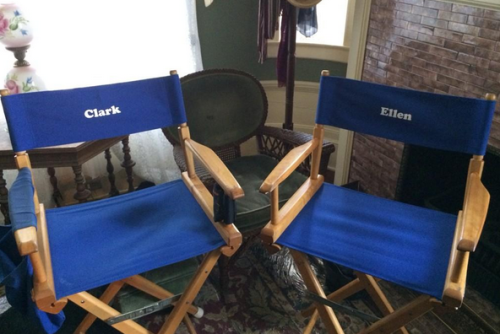 The reboot of Vacation that is currently shooting in Atlanta has made it’s way into Charlotte. They will be shooting tomorrow. The movie stars Ed Helms (Rusty), Christina Applegate (Debbie), Leslie Mann (Audrey) and Chris Hemsworth (Stone Crandall, Rusty’s “irritatingly successful” brother-in-law) to name a few.

Here’s the synopsis: Following in his father’s footsteps and hoping for some much-needed family bonding, a grown-up Rusty Griswold (Ed Helms) surprises his wife, Debbie (Christina Applegate), and their two sons with a cross-country trip back to America’s “favorite family fun park,” Walley World.

Sleepy Hollow as well as Secrets & Lies are not on location today.

The Choice, however, will be back in the intracastoal waterway before they head to a local favorite. Brasserie du Soliel. And to be fair, it’s also a celebrity favorite, too 🙂

And speaking of local favorites….1900 Restaurant and Lounge will be hosting a Bring Back Film party on Wednesday, October 29th. The party begins at 7pm. They are raising awareness not money and there is no cover charge.

The old story of a man, a dream & a struggle to the death with killer furniture. The lost 70’s cult classic is coming to the stage, live in 3-D this fall!

In 1973 George Barry wrote, directed, and produced Death Bed: The Bed That Eats.  It would not be officially released until 2003 (then on DVD) but would go on to become a cult classic through a pirated edition in Europe.

Wilmington’s own inventor Jock Brandis worked on Death Bed as a Gaffer and made The Bed actually “eat.” Patton Oswalt made the rediscovered film famous through his material lamenting that someone put money into Death Bed but he can’t get his work made. Jock is actually the guy Oswalt is making fun of for making The Bed.

Gwenyfar has adapted the film to the stage and added a “making of” element to Act One.  GET MORE DETAILS

Still looking for MORE volunteers at the polls!  We are looking for folks who are pro-NC Film to work in 2 hour shifts at the one stop early voting (October 23, 2014 – November 1, 2014) locations and on Election day (November 4, 2014) in New Hanover, Brunswick and Pender County locations.GET MORE DETAILS NOW