The day before the launch of the highly anticipated Battlefield 4, EA Games released the Multiplayer Trailer for the video game created by DICE.  Right around the one minute mark, a guy sounding awfully like the Noob (Brent Triplett), a character in the popular animated web series, Battlefield Friends, drives an ATV off a skyscraper, screaming, “LEVOLUTION” as he crashes into a helicopter.  If you look at the more than 7,500 comments, the fans instantly recognized the voice. After all, that high-pitched energy is unmistakable.  Haven’t seen it yet? Check it out!

Not even a day after the launch of BF4, youtube videos began popping up. People would swear up and down they heard the voices of the Medic (Nate Panning) and the Engineer (Jon Etheridge) from Battlefield Friends in the game.  Like this video for example.

After 1,000s of comments and multiple videos like these, the secret is out. Wilmington, NC’s own Hank and Jed Movie Pictures has FINALLY admitted it. “Yes, we’re in Battlefield 4.”  Okay, it might not be a secret as so many have posted about it, but at least it is official now.

So, how did this come about? I caught up with DICE’s Voice Over Designer, Viktor Israelsson, all the way in Stockholm, Sweden.  There’s actually no crazy story to attach.  He simply emailed the guys and asked them.

“Being a big BFF (Battlefield Friends) fan myself and also being a fan of underground animation culture (such as Newgrounds.com and similar), I simply thought it would be cool to have the BFF crew in the game,” said Isreaelsson. “Working with Voice Over, it was largely up to me and my colleague, Ludvig Kullberg, to find and pick characters for the multi-player and some small part single-player characters.”

Brent Triplett, Jon Etheridge, Tony Schnur and Nate Panning recorded at Post 1200, a post-production facility in Wilmington, NC. They all agreed on what an amazing experience it was to work with Viktor.

“When we first started making BFFs we thought it would be great if the developers would someday be aware of our show,” the Hank and Jed team stated. “Now years later being invited to be a voice in the game was an honor for all of us. Working with Viktor was great, he doesn’t know it yet, but we are all moving in with him next summer.”

Israelsson concurs. “Working with the BFFs was an awesome experience. All of them are really talented voice actors in the first place, and not just the humorous parts. They are all very professional, and in between they’re as fun as you’d expect them to be. The BFF recording sessions were a blast!”

Now if you are wondering about any other surprises the DICE team has in store for you, well you will just have to play the game.  If you ask the Noob about any BF4 secrets, you know exactly what he will say. See below.

CHECK OUT the first 3 seasons of Battlefield Friends on Machinima’s Happy Hour Channel.

Here’s the other interview from Monday!  The Battlefield Friends (Jon Etheridge and Tony Schnur) join Vaughn on Modern Rock 98.7.  Missed it?  No worries!  LISTEN NOW! 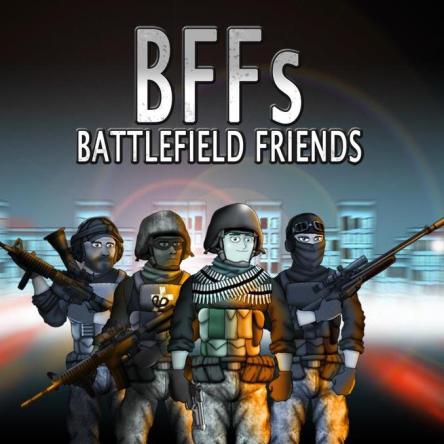 Missed it?  No worries!  LISTEN NOW!

Another Monday comes with NO Sleepy Hollow.  It is truly grueling.  But I guess it’s nice to know everything will be right as rain in 7 days time.  When we return we will meet the Sin Eater ft. John Noble!

But we need to get used to inconsistencies because the season finale will not be at its regular time either. FOX announced the date for the finale which will be on Monday, Jan. 20, 2014 at 8:00 p.m.

The UTD cast and crew enjoyed the weekend across the pond at the London Comic Con. Most of the cast are still there enjoying themselves. Missing Under the Dome?  How about reliving some bits.  Just in time for Halloween, here are UTD’s 13 creepiest moments.

Our local boys from Hank and Jed Movie Pictures (creators of Battlefield Friends) will be at Game Stop in Monkey Junction in Wilmington, NC tonight to help celebrate the release of Battlefield 4.  Plus they are giving away an autographed DICE/BF4 T-shirt while they are there.  The Prod Co was contracted by EA Games to do a “briefing” about BF4.  Check it out.

They will also be doing to LIVE radio interviews today taking phone calls from fans of the show.  Modern Rock 98.7 (1pm EST) and Z1075 (1:30pm EST).  You can listen live, just click on the radio station web sites.

Are you looking for some of the best movies to come out of Wilmywood?  How about a Wilmywood Thriller/Horror Marathon just in time for Halloween?  Check out what’s available in the Wilmywood Shop powered by Amazon.com  Buying from the Wilmywood Shops helps me keep this blog going!

That just about does it for me; I will have more Wilmywood updates for you tomorrow morning (unless something breaks) and every weekday morning at 7:30am & 8:30am LIVE on Sunny 104.5.  Got Scoop?  Email me: sheila_brothers@yahoo.com.  Or message me on Wilmywood’s FB .  Or just post your comments below!  Until then, that’s a wrap!!

Our local boys, Hank and Jed Movie Pictures, were hired by EA Games to produce a video that airs this Sunday on Machinima’s Happy Hour Channel as the gaming world gears up for the release of Battlefield 4.  So how did that coolness happen?  Their show Battlefield Friends (BFFs) has completed three seasons, working with the

Machinima Network, one of You Tube‘s largest distributors and most subscribed channels.  The Battlefield gaming community quickly caught on and fell in love with the show even catching the eye of game creator DICE as well as its parent company EA Games.  Within the past two years Hank and Jed has developed a relationship with the company and due to the BFF’s millions of views, working together within the social media realm was a win-win for all.  Hank and Jed are also the creators of the medieval comedy Doraleous and Associates, and Minecraft related Mob Squad. Current projects include the next season of Doraleous as well as Season 4 of Battlefield Friends, Battleloggers, Game Idiot and more.  FYI: Hank and Jed will be special guests at Game Stop in Monkey Junction in Wilmington, NC Monday night for the release of BF4.  I believe they will be showing their series during the release party.  You will also have a chance to win an autographed BF4 T-shirt from the folks at DICE.  LIKE the BFFs on Facebook now to stay in the loop!

Under the Dome folks have been in London all week as they get ready for the London Comic Con. They attend tomorrow.

The Squeeze is filming downtown today at the 1800 block of Nun St as well as the alleyway between Ann and Nun.

A Sleepy Hollow Marathon will air on FX (not FOX) tomorrow beginning at 1pm EST.

The People’s Choice Awards are asking you to vote for all your movie/TV favs, but how on God’s green Earth is Tom Mison NOT on the list as FAVORITE ACTOR IN A NEW TV SERIES?  Or even Nicole Beharie as FAVORITE ACTRESS IN A NEW TV SERIES? No worries you can write in their names!  I did. You should also write in Under the Dome!  Also, make sure to vote for Safe Haven, The Conjuring, We’re the Millers and more!  PLEASE VOTE NOW!

Are you looking for some of the best movies to come out of Wilmywood?  How about a Wilmywood Thriller/Horror Marathon just in time for Halloween?  Check out what’s available in the Wilmywood Shop powered by Amazon.com  Buying from the Wilmywood Shops helps me keep this blog going!

That just about does it for me; I will have more Wilmywood updates for you Monday morning (unless something breaks) and every weekday morning at 7:30am & 8:30am LIVE on Sunny 104.5.  Got Scoop?  Email me: sheila_brothers@yahoo.com.  Or message me on Wilmywood’s FB .  Or just post your comments below!  Until then, that’s a wrap!!