Hippety-Hoppety damn good mornin’ to ya! Under the Dome is off today as it is Good Friday, and a good Friday it is indeed.  However that doesn’t stop us from seeing stars, one in particular.

Our homie Domie Mike Vogel comes out of the Dome for the Hallmark Hall of Fame movie, In My Dreams this Sunday night on ABC at 9pm EST. (I know the video claims it’s on tonight, but it is on this Sunday) Nick (Mike Vogel) and Natalie (Katharine McPhee) are the perfect couple, only they have never actually met. After tossing coins in Haywood Fountain, the two start dreaming about each other. According to fountain mythology, they have exactly seven days to turn their dreams into a reality. Now doesn’t that sound as sweet as all get out! Don’t miss it!

Max Steel‘s Ben Winchell who plays the lead Max McGrath makes his way into town this weekend and his counterpart Ana Villafane will make it into town early next week!  Yay! Producer Julia Pistor as well as writer Christopher Yost was here as well, they are headed out, but will be coming back shortly as things will start getting super fun soon enough!

Looks like Nicholas Sparks’ The Longest Ride has pushed their start date to mid June. I will keep you posted on any other details that come out.

It has been 13 days since anyone has seen our film friend 53-year-old Shannon Rippy Vannewkirk.  Investigators with the Wilmington Police Department now believe there may be foul play surrounding Shannon’s disappearance. Apparently new information has come out that are turning the police’s minds towards the negative. They cannot say what that information is, but they are confident that foul play is at hand. At the vigil held last night on the steps of the federal building, the negative news that foul play is in the mix, it hit home for many. Thankfully in addition to the police on the case is the Cue Center for Missing Persons. There is no search team in the country better than the Cue Center. “Someone out there knows something and that’s why we have to spread the word. Someone may have seen something, someone may have heard something,” said Seidman to WECT.

WWAY,  however, has the latest on the vigil from last night. READ NOW

Now if you live in a cave, I still think you saw this!  I was quite pumped about my article that was published yesterday on EW.com  All about Wilmington baby!  So thanks for the shares and comments.  Feel free to continue that behavior!  Ha! READ IT NOW! 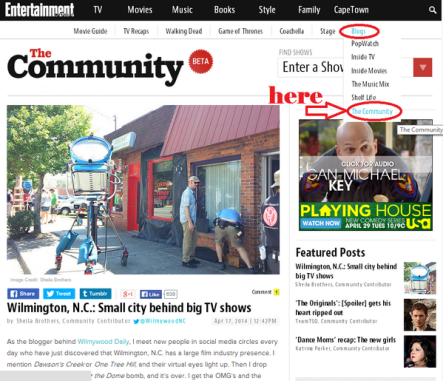 Earlier this week, we let you know that the Gregg Allman biopic Midnight Rider was planning to continue production. Once the news broke on the internet, a Facebook page called, “I REFUSE to work on Midnight Rider” was created.

Sarah Jones was killed on February 20, 2014 in Wayne County, GA while filming. Seven crew members were injured when a train collided with the set which called for the crew to be on a bridge. One member who was injured, Joyce Gilliard, is part of our Wilmywood Film Community. Help trend:  #BoycottMidnightRider on Twitter.

LOOKING FOR THOSE FILM=JOBS STICKERS? Sunrise Broadcasting has a few.  Feel free to stop by and grab you one while they last at 25 N. Kerr Ave. (near the intersection of Market and Kerr across from the new Walgreens). Offices are open 8:30am-5:30pm M-F.

WE GOT MORE!  Last time, they flew out of here in 24 hours!  Thanks to Jed and the gang over at Image Monster, you can now pick up these fab stickers at the Sunrise Broadcasting too!

That just about does it for me; Have a great Easter weekend and be safe! I will have more Wilmywood updates for you Monday morning (unless something breaks) and every weekday morning we do “What’s Up in Wilmywood” at 7:30am & 8:30am LIVE on Sunny 104.5.  And on Thursdays during Cape Fear CW‘s Primetime News at 10!  Got Scoop?  Email me: sheila_brothers@yahoo.com.  Or message me on Wilmywood’s FB  or on Twitter.  You can also just post your comments below!  Until then, that’s a wrap!!

Well, as you can see,the What’s Up in Wilmywood blog got a facelift, so lemme know how you like the new look.

Another movie rolls into town this week thanks to Swirl Films! This is their 3rd movie this year! Kim Stewart begins principal casting this week for The Dempsey Sisters. I can tell you the main cast is African-American and there some great roles to fill with various age ranges. More details to come!

Nothing new for Christmas in Conway. They continue to film in the Forest Hills area.

We finally get a peek at the pilot episode of Sleepy Hollow tonight. If you RSVPd, the advance screening will be at Regal Cinemas at 7:30pm…BUT get there early! Per usual, it is oversold!  The Sleepy folks are shooting on the lot again today.

Congrats to Deborah Johnson!  She got the chance to play a 1700 witch on the show! You scored the pass to tonight’s screening of Sleepy Hollow!

The television premiere on September 16th comes on the same day as the Under The Dome ends – Gonna be one hell of a night!

Apparently Under The Dome is panning out for Amblin Entertainment.  Although Madonna tops Forbes Magazine‘s new list of the top earning celebs.  Steven Spielberg came in second with a $100 million pay check from June 2012-June 2013.

That just about does it for me; I will have more Wilmywood updates for you tomorrow morning and every weekday morning at 7:30am & 8:30am LIVE on Sunny 104.5.  Got Scoop?  Email me: sheila@1045sunnyfm.com.  Or message me on Wilmywood’s FB .  Or just post your comments below!  Until then, that’s a wrap!!

It’s numbers day once again for Under the Dome.  We will find out the overnight ratings by 11 or 11:30am EST.  I, of course, will post them along with reviews and thoughts from the press and critics as well in a separate blog later today.  And I will keep you posted about Season 2.  Word is the crew will find out this week if they return to work and when!  The UTD folks are shooting the final episode this week.  They film on the lot for the day on Sound Stages 7 & 8.

YES!  Wilmington is in the TOP 7!  Yesterday we weren’t even on the radar.  BUT we need to be in the top 3!  DEMAND an early screening on the locally filmed Sleepy Hollow.  Sleepy Hollow will kick off the episode two shoot this weekend in New Bern.

Eastbound and Down is back to Jellybeans today with about 50 extras skatin’ around having fun.

The Hallmark TV Movie Christmas in Conway is looking for a photo double for  for this lovely and talented actress, Mary Louise Parker. You must have the same coloring and measurements and be available the month of August. She is 5’8 ” and weighs 120lbs.Her measurements are 34/24/33.  Please send a recent photo (head and bodyshot) to wimingtonbackground@gmail.com include your sizes and contact info. Please put MLP photodbl in subject.

WECT brought the Angelina Jolie movie, Unbroken up again.  Although, I reported this movie’s interest in Wilmington about two months ago, they have added that Jack O’Connell will play Louis Zamperini, the Olympian turned POW.  My sources tell me that they REALLY like Hawaii, but hopefully they will see that North Carolina has way more to offer and is more cost effective!  Thanks for reporting this Ashlea!

And speaking of maybes remember when I brought up Loomis Fargo months ago! What light can we shed on bank heist movie?  The Jim Carrey flick (that has been in “pre-production”) for months now supposedly here in Wilmywood has attached another actor to its roster.  Looks like Owen Wilson will join in on the bank robbing in this comedy flick.  On a sidenote, Danny McBride and Jody Hill are two of the writers on this movie.  I’m thinkin’ a rollover here!  Just stay here and keep filming! Eastbound Film Crew can roll over as well!  My sources are telling me they have been some verbals hires, but I cannot confirm that.  Yet anyway!  Hopefully that is their plan with Relativity Media!

That just about does it for me; I will have more Wilmywood updates for you tomorrow morning and every weekday morning at 7:30am & 8:30am LIVE on Sunny 104.5.  Got Scoop?  Email me: sheila@1045sunnyfm.com.  Or message me on Wilmywood’s FB .  Or just post your comments below!  Until then, that’s a wrap!

Another movie coming to Wilmington would be like Christmas coming early, right?  Well, according to my sources, it is.  And they have the offices to prove it. The Hallmark Movie, Christmas in Conway has set up shop at the 1200 building on 23rd St.  They’ve been scouting around the area including downtown and its surrounding neighborhoods.  Brent Shields is Executive Producer, John Kent Harrison is directing, Ronnie Yeskel and Sharon Howard-Field are doing principal casting. I will keep you posted!

Well, yesterday I found out tours for Screen Gems won’t happen as soon as August, in fact it is still TBD at the moment, BUT there are BIG PLANS FOR THE BACKLOT – and it’s going to be HUGE!  Looks like 17+ buildings going up recreating colonial times for Sleep Hollow!  This will

be the biggest set we have had yet on the back lot at Screen Gems!  And you know what that means?  It means money in our vendor’s pockets!  Paint stores, lumber, hardware, you name it!  Keep the Wilmington economy going, Sleepy Hollow!!  Production begins at the end of the month.

WECT picked up on this fun story!  27 year old Rachel Spalding will be one of 16 cast members on a new reality show called Summer Camp on USA Network.  They will compete for a chance to win $250,000.  The show premieres Thursday, July 11 at 8 p.m

While, I am waiting rather impatiently for Episode 2’s numbers, the encore of the pilot for Under the Dome grabbed 5.12 million viewers giving it the most viewers in its time slot and 3rd place overall for Sunday night!  I know Under the Dome’s final ratings count of 16.6million views last week is going to be hard to beat, but as long as the numbers are still double digits, we should indeed see a second season announcement.  :::::biting fingernails:::::  The Under the Dome folks are shooting at the farm again in Currie, NC.  Thanks for the pic, Sandie!