As we gear up today’s release of The Muppets Most Wanted, Wilmywood Daily wants to honor one of the greatest Muppet movies to come out of Wilmywood! We’re going back to 1999 with MUPPETS FROM SPACE.

You may remember this story: Gonzo is contacted by his alien family through his breakfast cereal. He is kidnapped and it’s up to Kermit and the gang to rescue Gonzo and help reunite him with his long-lost family. Here’s a couple of stories from this movie I betcha never knew!

A friend of Wilmywood Daily, Martin Eckhardt (pictured left), was Jeffrey Tambor‘s (pictured below) stand in and did a few scenes in costume as a man in black. Hulk Hogan had a cameo appearance in the film as one of the “Men in Black,” it called for him to be wearing a white dress shirt and tuxedo type jacket. The wardrobe department could not find a shirt with a big enough neck size to fit his massive neck which is reported to be 21 inches around!! They came to set to show the director, Tim Hill what the problem was and he just shrugged and said, “Cut it in the back where it won’t show or cut the collar off completely.” Problem Solved.

EUE/Screen Gems construction foreman Tom Jones, Jr., who is celebrating his 30th year in Wilmington this month, also worked on MUPPETS FROM SPACE and says that the Henson Group is amazing 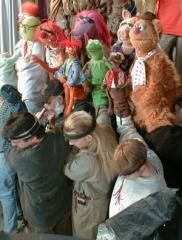 and the most upbeat and happy people ever! “Who wouldn’t be working with puppets all day?” This film was Tom’s 4th time working with the Henson Group. His most memorable moment  was seeing the magic of what the camera captures compared to what the naked eye of on-lookers see. According to his recounts, it’s “Chaos.” A controlled chaos, we’re sure! The camera captures the Muppets interacting with it’s human cast mate, but the crew sees a puppeteer operating the creature in the scene also. Most puppeteers are also the voices so include yards of audio cables AND visual cables attached to monitors so the puppeteers can watch the screen to ensure their creature counterparts are hitting the proper marks and you have a lot going on! Tom told The Wilmywood Daily that MUPPETS FROM SPACE took up nearly every stage at EUE/Screen Gems while filming. “Stage 4 and Stage 1 were most memorable because Stage 1 was the sculpture shop where over 100 artists and sculptors built the elaborate props.”  Stage 4 was a pebble laden beach where the spaceship lands. Many of those props were taken out to Fort Fisher to complete the scenes with fog and smoke FX and eerie lighting on the trees.

Another construction crew member Simon Park recounted what it was like to build sets and props for not only the human actors, but the puppeteers as well. Simon told Wilmywood, “It was a challenge and totally different concept” of what the building crew is used to doing. According to Simon, normally one will lay out plans for the prop or set needed and then begin. In MUPPETS FROM SPACE, each set and prop needed to fit in the puppeteer and their equipment as well.

All the crew members that Wilmywood spoke to today had one thing in common: They loved that spaceship! Guess we are all just kids at heart. 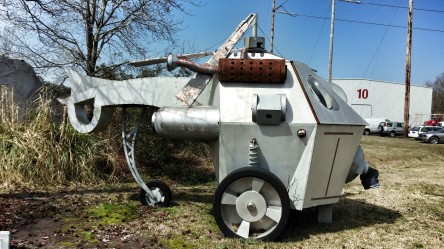