HB171 (which is a duplicate of SB 193), both of which were filed March 5th, passed it’s first reading yesterday in the House. This would put $66 million in recurring funds for the 2015-2016 fiscal year and would would become effective July 1, 2015. The funds are reserved for a production on which the production company has qualifying expenses of at least the following:   For a feature-length film would thankfully drop to $1,000,000).  For a video or television series, it would go up from $250,000 to $1,000,000 per episode.  I will keep you posted!

Sooo, right after Gov Pat McCrory announced his proposed budget which would only allocate $10 million in funding for our North Carolina Film Industry for  each year over the next two fiscal years (effective July 1, 2015), I asked, “What will the NCGA do about it?”

SB 193, sponsored by Michael Lee and Bill Rabon was filed today.  Yep, you heard me right, THE SENATE!  It would put $66 million in “recurring funds for the 2015-2016 fiscal year for use consistent with the purposes of that Fund. This act would become effective July 1, 2015, and applies to grants made  on or after that date.”

The funds are reserved for a production on which the production company has qualifying expenses of at least the following:   For a feature-length film would thankfully drop to $1,000,000).  For a video or television series, it would go up from $250,000 to $1,000,000 per episode.  This bill also provides for Commerce to enter into multi-year contracts.  Take a gander and see what you think!  SEE FILED SB193 NOW

OH BUT WAIT THERE IS MORE!

Meanwhile back at the House Representatives Ted Davis along with Lewis, Saine, and Iler filed a bill of their own for film HB171!!! Wait, strike that, both House and Senate filed the same bill!  YES!  Every damn word is the same!

Hold on, am I dreaming?  Both the House and the Senate both agree on something? SEE FILED HB171 NOW

An article came out today from the Associated Press about the NC Film Incentives, the pros and cons according to legislators.  They also talked about the HIGHLY anticipated Impact Study that was conducted at the end of last year.  If you are like me, you have been EAGERLY waiting for this.  The good news is that it is done, and already some Wilmington folks have already been briefed on its findings.  It will be released to the public sometime this month.

“Rep. Susi Hamilton, D-New Hanover, who wants a permanent tax credit, said the study, among other matters, determined state and local governments get roughly $1.50 back for every dollar in state incentives given to production companies.  ‘Obviously the credit is working and it’s benefiting the state,‘ Hamilton said, ‘so why change it?‘” 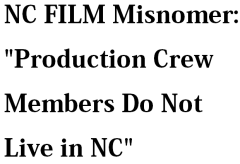 We keep hearing from misinformed public officials that the film industry creates jobs that are not permanent and that private contractors come in from other states and leave when the film or television productions are over. This is one of the most twisted ideas that is thrown out there all the time. Although some outside workers do come in, most of those are producers, actors, and some department heads. NC has a leg up after 30 years of making films and television shows.  We have department heads that have made NC their permanent home.

The first thing people have to understand is that North Carolina has a crew base unlike many states since we have been making films since the 1980s. A huge number of NC film crew members also work on films in Georgia, South Carolina, and Louisiana which strengthens those states’ crew bases whenever there is no work due to political uncertainty in NC.

There are thousands of skilled workers across the state that have made NC their home for the past thirty years (welders, drivers, carpenters, electricians, etc….) that work full time in the film industry. There are many that are born and raised in NC that have entered the film industry when other industries slowed down due to unfair trade agreements, shipping jobs over seas, etc.  Again, another example of legislators creating economic conditions that ruin industries.

When crew members worked on “Dawson’s Creek” for 6 years, quite a few rolled over to “One Tree Hill” for another 9 years. They would most certainly say that 15 years of steady work is not part time contracts. This is a just one example.  Many crew members will end a show after 6 months on a Friday and start a new production that following Monday.

Let’s talk about how much a film industry worker puts in in labor hours. The average film crew member works 70-80 hrs a week, and for a select few that could be more.

Most film crews work in 6 months what it takes your average 32-40 hr a week worker a full year to do. These are dedicated hard working North Carolinians.

When the snowball effect of productions rolling in one after another is in full swing due to legislators creating the economic conditions, then most film crew workers will put in more hours than an average NC worker would have worked in two years in just 12 months.  These are not part time jobs.

NC is now home to some of the highest rated TV shows airing on television. “Sleepy Hollow”, “Under the Dome”, “Homeland”, “Banshee.”  If these networks had to fly in all 200 workers per show from other states, put them up in hotels, and give them per Diem for six to eight months at a time,  then it would not make any economic sense to film in NC.  This is yet another reason why we have so many television shows come here to do business.

The fact is we have THOUSANDS of crew members that live in North Carolina.  They owns houses, send their kids to NC schools, pay taxes.  Thousands that call North Carolina their home, not their little vacation town.  This only scratches the surface. Remember we also have major motion pictures rolling in our state as well. Just take “Iron Man 3” for example. They had over 300 crew members working 70-80 hrs a week for 10 months in NC.

FACT: WE HAVE FULL TIME PERMANENT WORKERS THAT LIVE IN NC.

Just 24 hours until the HUGE Under the Dome Premiere ticket giveaway!  Free Ticket Friday begins at 7am tomorrow!  Go here for all the details! CBS put out a GREAT sneak peek yesterday, you really gotta see, Go Under the Dome with Stephen King.  The good folks head back to Currie, NC today.

The Tammy crew still on Cabbage Inlet doing the huge 4th of July Bash scene with a full cast.  Kathy Bates, Melissa McCarthy, Susan Sarandon, Gary Cole, Mark Duplass, and Sandra Oh.  Fireworks are supposed to light the night for the scene, but the weather might hold them off until tomorrow night.

MULLET ALERT!  Eastbound and Down heads downtown.  They will be shooting at the Hilton and one of my favorite places to dance Sputnik on Front St.

Heads up for tomorrow, Eastbound and Down will be shooting a fun drag racing scene at the intersection of Princess Place Dr. and 23rd Street from 9:00 am to 3:00 pm and intermittent traffic will be allowed through this intersection.  SO, if you are flying out, make sure you give your self a lot more time than planned.

The City of Southport has set a new record for tourism numbers this year, thanks to film productions taking over the town. The Southport visitors’ website numbers have reached an all-time high as well as those stopping by the office. They say Safe Haven alone has taken them to a whole new level.

ANd finally an FYI for ya.  Nevada has gotten into the game. Starting Jan. 1, productions that shoot at least 60 percent in-state and spend $500,000 to $40 million there will be eligible to earn a transferable tax credit worth 15%-19% of their in-state qualified expenses up to $20 million.

That just about does it for me; I will have more Wilmywood updates for you tomorrow morning and every weekday morning at 7:30am and 8:30am LIVE on Sunny 104.5.  Got Scoop?  Email me: sheila@1045sunnyfm.com.  Or message me on Wilmywood’s FB .  Or just post your comments below!  Until then, that’s a wrap!