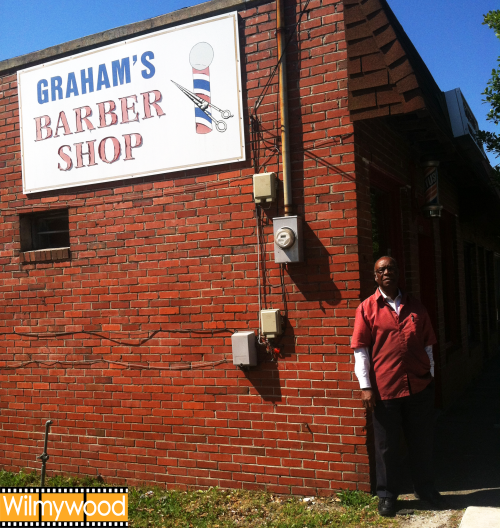 Even though I have said this until I am blue in the face, it seems as though the message isn’t getting out there enough. 4200 people who hold full time jobs in the film industry isn’t the whole story; it’s just a part of it. Small businesses benefit from film in a big way. Talk to folks at The Ivy Cottage, Triangle Rent a Car, Old Books on Front, Manna, Brown Dog Coffee Co., Image Monster, etc. 100s of small businesses benefit from our NC Film Industry. Even Barber Shops.

Meet Mr. Graham. I did a story on him a few months back. (SEE STORY NOW), but if you have never met him, you probably didn’t realize he would be one of your favorite folks who live in Wilmington. With his infectious joyful personality and smile, he tells the story of how proud he is to support NC Film. Mr. Graham owns the barber shop at 5th and Castle Sts.  He had the opportunity to work with the film industry on Under the Dome. Listen to what he has to say. He has just one of 100s of stories that our politicians need to hear.

So, how can you help save NC Film? The majority of the general public loves the film industry here and agrees it needs to stay. So, get out and vote wisely. I can help you in a few counties.

Still looking for MORE volunteers at the polls!  We are looking for folks who are pro-NC Film to work in 2-4 hour shifts at the one stop early voting (October 23, 2014 – November 1, 2014) locations and on Election day (November 4, 2014) in New Hanover, Brunswick and Pender County locations. GET MORE DETAILS NOW

In 2013, April Vickery was working as a security guard on set at 5th St. for Sleepy Hollow. The catering truck and crew parking were in the lots on either side of Graham’s Barber Shop at 5th & Castle. April was on foot patrol covering both areas so she passed the shop numerous times during the day. The owner of the shop, Mr. William Graham,  came out and made conversation with her. At the time he had returned from a trip from Nashville. He visited Graceland with his family and commented on how smart he felt that Elvis’ widow had been to invest in properties around the original home to make Graceland happen. He commented about the amount of work that Graceland brought into the town and how it helped improve the community not only with work but a sense of pride that they were all part of something so big.

He also spoke about Wilmington very fondly and has been here for many years (52 years in business). He said he hoped that more productions would come to town and he hoped that people realize how good it was for us to embrace the changes productions make for us.

Meanwhile, during this same time period, the executive producer of Under the Dome, Jack Bender, spotted that very barber shop.

“Since our first year on Under the Dome,” Jack remembers, “when I saw this small barber shop in town I went, ‘We have to have a town barber who has to be a character.’ So I was talking to Neal (Baer)and Brian (K. Vaughn) about it and they went, ‘Yeah yeah… Big Jim (Dean Norris) goes there. Could be his confidante.’  So finally, Dwight Yoakam wanted to do the show and they said, ‘We’ll make him the barber.’ So we went to this gentleman’s barber shop, but he had a bright red floor with red walls and I said, ‘We can’t have a red floor. The floor is too red. It’s too bloody.  See if he’ll let us do a black and white check classic barber shop floor.'”

But they didn’t stop there.  They basically did a soft remodel. New floors, new sinks, repainted the cabinets, the walls. Everything!

I asked a Wilmington Crew Member who is currently working on the show about the redo.

“The other day when we (film crew) were working at the barber shop, I talked to the owner and the owner was thrilled that he got the new floor. The crew offered to change it back to red when the show was over, but some customers came in and saw the checkered floor all shiny and waxed and said, ‘Don’t you dare let them take that floor up! You need to keep that floor!’ So, he decided that since his patrons are absolutely in love with the new remodeled floor, he is going to keep it. The soft remodel of his entire barber shop was at no cost to him. He is elated and he even had a couple of politicians that come in to get their haircut that told him, ‘You need to write your senators and local representatives and tell them your story.’ Mr. Graham said that he was going to be on the phone calling them later that day.  It’s nice to see a small business not only get a paycheck (for location use) and a beautiful redo for free, but his barber shop will be immortalized on a Stephen King project and people will come there just to get their hair cut at the barbershop that Lyle (Dwight Yoakam) worked at in Chester’s Mill.”

This is just one of many stories to come how NC Film affects our NC communities.  Got a story to share? Let us know!  Email: sheila_brothers@yahoo.com