North Carolina has two more feature films coming to shoot this spring and summer. And each are both filming in more than one state.

Overflow Entertainment is taking The Sin Seer to two states.  North Carolina and Louisiana. The story involves Rose Ricard who has been given a very special gift by God — the ability to see the sin a person carries in their soul. While she uses her gift to, hopefully, rights the wrongs in society, she also knows the gift comes with a price tag.

Is it just me or does John Noble needs to be a consultant on this flick? (Sleepy Hollow reference). Producing is Angela White.  Paul Hannah is the writer/director.   Production is currently scheduled to begin May 5.

Pathways Productions is bringing us The Show.   Looks like they will also be splitting the love between NC and Atlanta, GA.  As it stands, they plan to shoot this summer.  The Show is about Percy King, a very talented musician who aspires to be a great band director, but of course a girl gets in the mix, and in the way messing with his emotions and leaves him questioning his morals.  The production company deems it a story about “man’s constant strive for perfection and his constant inability to achieve it and sheds light on a community of often misunderstood strangers that act as a family, even in the darkest of times, and shows you why no matter what, the show, much like life must always go on.” Justin Jacobs is writing.  JR Butler will direct.

No word yet if they will be filming in Wilmington or in other parts of North Carolina.  I will keep you posted.

Stunt Coordinator Peter King and the Red 27 crew had their hands full Monday as over 50 stunt performers filled Stage 3 at EUE/Screen Gems Studios, for Under The Dome Season Two stunt auditions.  Now, normally you don’t see too many open auditions when it comes to stunts, around these parts anyway, but there was a damn good reason. 1) Meet new talent.  2) Local hires.  As we gear up for multiple shows filming simultaneously, Peter wanted to reach out to the Wilmington area and really see who is out there.  Monday’s 2-hour action packed audition gave Peter and his team a chance to meet performers face to face and get a taste of what they’ve got.  It’s really important to Peter to hire local first, then if there is a need that cannot be filled to look regionally.  And after reviewing the tapes yesterday, they think they found some great new folks to add to their list of local talent.  On a personal note: THANK YOU for hiring local!

New Line has set a release date for the sequel for The Conjuring. It will be a pre-Halloween release on Oct. 23, 2015.  Looks like Patrick Wilson and Vera Farmiga will return.  Variety reported that the yet-to-be titled sequel does not have a director yet.  Location is still unknown at this time. READ MORE NOW 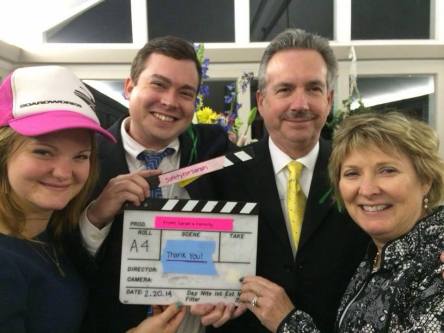 From Sarah’s Family: Thank You.

“This was Sarah’s personal slate. As you can see by the date she wrote on the bottom left corner, it was with her on that unfortunate day. Our thanks go out not only to the Slates for Sarah community, but also to every hard worker that ever contributed to the industry. She considered you family. We smile because Sarah smiled. We laugh because Sarah laughed. And we cry because we miss her so much. Be kind. Be safe. But, above all, be happy! Never forget Sarah Jones!”

In the meantime, if you haven’t seen the petition floating around, to add Sarah Elizabeth Jones to the Academy Awards Memoriam Tribute, please sign it, they only need a few hundred more to meet their 37,000 signatures. SIGN PETITION NOW

Just before the funeral for Sarah Jones yesterday, Variety reported that Midnight Rider has suspended production in Georgia.  The crew has been released for now, but they were told that they will be recalled at some future date.

REMINDER: Local actor Logan Siu is going to be in multiple episodes of the Sundance Channel’s The Red Road.  It premieres TONIGHT, February 28th. They shot it in Atlanta last fall and the show has been picked up for a full season.  Congratulations Logan!

IF YOU ARE IN OR WORKED ON A FILM THAT PLAYED AT CUCALORUS, you get a special discount.  Your tickets will be $60 each, but you must email the folks at Cucalorus. CONTACT THEM NOW!

Due to unforeseen circumstances, Orlando’s team is RESCHEDULING the 3/8 TAINTED LIVE show in Wilmington. They said they are sorry for any inconvenience. Any ticket winners will get tickets to the next show. A new date has not been set yet, but they did say they would give me the exclusive first announcement when the new tickets go on sale.  Again, the show is NOT canceled, just rescheduled.  I will post the details when I get them.  We will pick the two winners when they give us a new date!

LOOKING FOR THOSE FILM=JOB STICKERS? Sunrise Broadcasting has a few.  Feel free to stop by and grab you one while they last at 25 N. Kerr Ave. (near the intersection of Market and Kerr across from the new Walgreens) Offices are open from 8:30am-5:30pm M-F.  Please one sticker per person please.  They will run out fast!  Thanks!