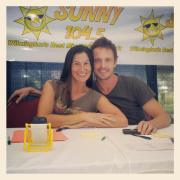 Me and cutie David Lyons

Will NBC’s Revolution will stay here or not?  That’s still a 50/50 split.  Especially between the cast and production team.  The AWESOME cast, of course, wants to stay! The production team wants to move to Charlotte.  Beach season is around the corner people!  Let the cast and crew enjoy the coast for another season!

Under the Dome will be on the lot for the first half of the day, then head to Chestnut St.  in the evening.

The Melissa McCarthy movie, Tammy’s start date, earlier reported to be May 6th, might get pushed to May 9th or later.

On to the swirling rumors.  My favorite part.  My sources tell me there’s apparently another TV pilot looking to shoot here in June for 3 weeks. All but 3 days would be shot on the lot.

My sources are also hearing rumors about another really BIG feature coming in late May, but don’t have any details. Yet, that is!  Haha!

That just about does it for me; I will have more Wilmywood updates for you Monday morning and every morning (Monday-Friday) at 8:30am.  Until then, that’s a wrap!