I had the honor of speaking with Jolene Purdy who plays Dodee on Under the Dome over the weekend. SPOILER ALERT! If you haven’t seen episode 12, don’t listen! It does reveal a big plot point that you wanna see before you listen to the interview! 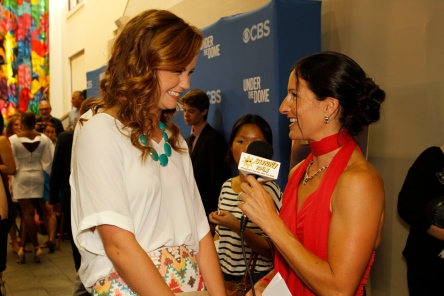 If you live in Wilmington and are anything like me, you are totally geeking out about Monday night.  We get our first taste (if you didn’t go to the early screening or couldn’t get in) of Sleepy Hollow and our life Under the Dome comes to an end.  Well, until next year anyway.  Over the past 8 months we’ve had some wonderful talent in our own backyard.  They became our neighbors and our friends.  They are kind, approachable and grateful for the opportunity to work on the #1 show, Under the Dome.  And as we eagerly gear up for Monday, I decided to get in touch with some of our favorite cast members.

Mackenzie Lintz who plays Norrie on Under the Dome took a few minutes to chat about homelife, Colin Ford and of course life under the dome.

SHEILA: Lady! We miss you!  I hope you had a great summer.  Now that Under the Dome has wrapped season one, looks like you have some normalcy back in your life again.  How has your transition been from set tutor back to normal high school life?  Do some teens as school treat you differently because you are on TV?

MACKENZIE: I absolutely LOVE being back in school. I’m in a really small private school so my class is like my family. They don’t treat me any different because they just see me as Kenzie just like they did before Under the Dome. Even though a lot of them watch the show! 🙂

SHEILA: Shane Bates has a great question for you.  This week, we discovered that you are not the only actress in the Lintz clan.  What’s it like living in a family full of actors?

MACKENZIE: Shane, I absolutely love having a family of actors. It’s so awesome because all of us are in different age groups so we don’t really have to compete so it’s easy to cheer each other on and be happy and excited for each other. My brother is actually working in Wilmington (Where UTD is shot) for a future episode of Sleepy Hollow.

SHEILA: Now you know I gotta ask this question ’cause the ladies wanna know!  What’s it like to work with Colin Ford?  Are you two close in real life?  Still stay in touch during the hiatus?

MACKENZIE: Hahaha!! Colin and I have so much fun. It’s actually his 17th birthday today!!  {yesterday} We are constantly laughing on set and doin’ crazy stuff. He’s such a talented actor and it’s so easy to play Norrie when he’s playing Joe.

SHEILA: My friends from Under the Dome Radio Podcast ask, “What can you tell us about Norrie’s dad and will we ever get to see more of that relationship?

MACKENZIE: Papa Norrie won’t be back in Season One, but Season Two will definitely bring a lot of excitement, who knows who will show up!! 🙂

SHEILA: What was the most exciting part about shooting the finale for you?

MACKENZIE: Well, for one thing, we found out while shooting the finale that we were officially picked up for a season 2!! That made goodbyes a lot less sad because we knew it wasn’t goodbye forever.

SHEILA:  Okay, final question.  The biggun’!  Any hints about what we can expect this Monday?

MACKENZIE: All I can tell you about the finale is that it’s one of our MOST exciting episodes, you will find out more about the dome, who the monarch is, and maybe see a familiar face or two. It’s gonna be EPIC!

Just like this interview!  Thanks Mackenzie!  We can’t wait until UTD returns to Wilmington in February!