The 20th annual Cucalorus Film Festival  kicks off tonight with Dancalorus it runs through Sunday. Visit cucalorus.org for a complete schedule.

Cucalorus honors Dino De Laurentiis‘s legacy as this year’s retrospective artist. According to the Cucalorus web site, the program will feature his most famous films — like Flash Gordon and Hannibal — along with one of his earliest Wilmington productions — Crimes of the Heart. Immediately following the screening of Crimes of the Heart special guests, including Dino’s wife and long-time producing partner Martha De Laurentiis, will take the stage at Thalian Hall for an extended discussion to examine Dino’s legacy and the early days of the studios in Wilmington.

Other Wilmywood local flicks of note include:

Times Like Dying (Starring Anthony Reynolds, Mike Holmes, Cullen Moss) Exhausted and on the run from a desperate bank robbery, a mangy gang finds shelter at a small farmhouse of a frail and sickly US Marshal. Soon the truth of their exploits come to light as Miss Ledbetter, the Marshal’s nursemaid, overhears their fireside conversation. She is taken hostage by the menacing Lonzell Dixon, who surprises her at gunpoint. Tensions escalate when Lonzell’s greed, lust, and struggle for power overtake him and the household. Thursday, November 13, 7:15 PM, Thalian Main

Secrets and Lies has officially wrapped yesterday.
The Choice is back on private property today.
Sleepy Hollow is shooting on the sound stages today.
Blue Mountain State begins production next week.

RATINGS: Monday night’s episode of Sleepy Hollow pulled a 1.5 in the ratings with 4.65M viewers in the A18-49 demo.

Our Under the Dome/The Longest Ride lady Britt Robertson landed a lead role in the Eddie Murphy movie, Cook, which is about a cook who is hired by a dying man to make meals for his girlfriend and his daughter after he passes. Eddie Murphy will play Henry Church, an artistic man who agrees to care for the dying Marie Brody and her daughter Charlotte for six months, only to end up ingrained in their lives for the next 15 years. 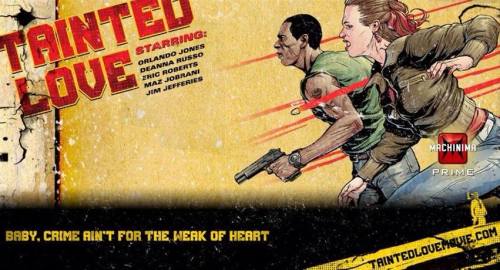 A press release just came out regarding Orlando Jones’ “Tainted Love.” Of course you know Orlando Jones from Sleepy Hollow as Frank Irving.  It is a graphic novel of the film kind starring Orlando and features Eric Roberts who was here in Wilmywood last year for The Perfect Summer.

This is an evening of film, with music by Wicked Warlock and Gang Stir Rock, dance and a Q & A from Orlando Jones at the end of the film! Tickets will be $15 in advance and $20 at the door. Though it is not part of the Cucalorus, it is playing the week of the film festival.  See below!

Tickets go on sale, October 1st. (more details for ticket purchase to come)
Check out their Facebook invite for all details.

Black Barry (Orlando Jones) is a binary man: one part criminal, one part new father. He is a grossly underpaid bag man for Fred Lucas (Eric Roberts), the baddest gangster in town. The love of his life, Jezebel Jackson (Deanna Russo), is his perfect match: one part thief, one part new mom. Jezebel has a two step plan to establish their new family. Step one: rob Fred Lucas. Step two: marry Barry. Her plan goes horribly wrong and puts Barry at odds with Detective Jamshid (Maz Jobrani) and Lucas’s goons. Barry will stop at nothing to ensure his family’s safety

Brought to you By: Anything But Weddings Promotion & Events

Normally we know who is coming into town as they are filming here for either a feature film or television show.  But sometimes we get a surprise or two.  Like Michael Phelps, for example, who is spotted in Wrightsville Beach from time to time because of his girlfriend Win McMurry‘s ties to Wilmington.  Others include Alec Baldwin, Al Gore and the most recent Michael Strahan.  He wasn’t here for a shoot unless you are talkin’ about hoops.  He was here for personal reasons this weekend; to attend a basketball game.  His twins live here.  He also spent some time at Monty’s Home’s Pet Expo last weekend.  It was great to hear him talk about Wilmington on Live! with Kelly and Michael. WATCH NOW

Now this weekend, we will see another star, not for TV or Film production but for an appearance at the Wilmington Home Show.  And if you are an HGTV/DIY fan, you know this guy.  And the ladies LOVE him. On a personal note, he hosts one of my favorite HGTV shows, “Yard Crashers.”  Now, to find out if he does indeed have any ties here to Wilmington.  Here’s the deets if you would like to meet the hotness that is Ahmed Hassan. Stolen from the Wilmington Home Show‘s web site:

Turn your outdoor oasis dreams into a reality!

You’ve seen him on HGTV & DIY Network’s “Yard Crashers” & “Blog Cabin” – Now don’t miss your chance to meet the one and only Ahmed Hassan. Ahmed’s expertise in landscaping, horticulture and soil science has made him one of the most hotly sought-after landscapers and gardening consultants by homeowners and businesses alike. That’s no surprise: Ahmed’s been digging in the dirt – and loving every minute of it – since he was ten years old.

Meet Ahmed at The Lifestyle Stage as he shares his amazing ideas for turning your outdoor oasis dreams into a reality! He will be appearing Saturday at 12:00 PM & 4:00 PM, and on Sunday at 11:00 AM & 2:00 PM at the Wilmington Home Show which will be held at the Wilmington Convention Center.

If you missed it in the 2 previous blogs, we have some casting announcements.

Wanna win a pair of VIP passes to Orlando Jones Presents Tainted Love at the Brooklyn Arts Center, Saturday March 8th?  These passes give you the best seats, PLUS a meet and greet with Orlando.  Though each VIP s a $100 value, the experience is priceless! All you gotta do is click join to enter! ENTER TO WIN VIP PASSES NOW!

This will be a SOLD OUT event, so buy your tickets now!  There will be two showtimes.

CALLING ALL VOLUNTEERS: Orlando Jones and his team are looking for volunteers for March 8th before, during and/or after the show!  All volunteers will have a meet and greet of their own after the second show.   If you are interested, please email me as I am helping a tad as well being Volunteer Wrangler:  sheila_brothers@yahoo.com SUBJECT LINE: Orlando Volunteer.

LOOKING FOR THOSE FILM=JOB STICKERS? Sunrise Broadcasting has a few.  Feel free to stop by and grab you one while they last at 25 N. Kerr Ave. (near the intersection of Market and Kerr across from the new Walgreens) Offices are open from 8:30am-5:30pm M-F.  Please one sticker per person please.  They will run out fast!  Thanks!

Sheila Brothers gives you the scoop about the hottest shows and movies filming in Wilmington, NC. Here is a Week in Review from Feb 10 – Feb 16, 2014.

WILMYWOOD – Where Wilmington and Hollywood Collide

The Wilmywood reports are posted daily Got Scoop? Email me: sheila_brothers@yahoo.com. Or send a message via Wilmywood’s FB .

Orlando Jones is back!  Presenting an absolutely fun and crazy evening with Orlando Jones: Tainted Love and you have the chance to hang with the man himself at the Brooklyn Arts Center.

From the twisted imagination of film, television and social media star Orlando Jones comes Tainted Live, a comedy, music and digital entertainment experience inspired by his award winning graphic novel action comedy “Tainted Love”. A self-described comic book geek, Jones and his intrepid band of fanboys will traverse the globe to spread their unique brand of R-Rated merriment and foolishness.

The Wilmywood Daily is giving you a chance to win a pair of VIP passes to the event.  These passes give you the best seats, PLUS a meet and greet with Orlando.  Though each VIP s a $100 value, the experience is priceless!

This will be a SOLD OUT event, so buy your tickets now!  There will be two showtimes.

If you havent seen the hilarious web series, Tainted Love: WATCH IT NOW!